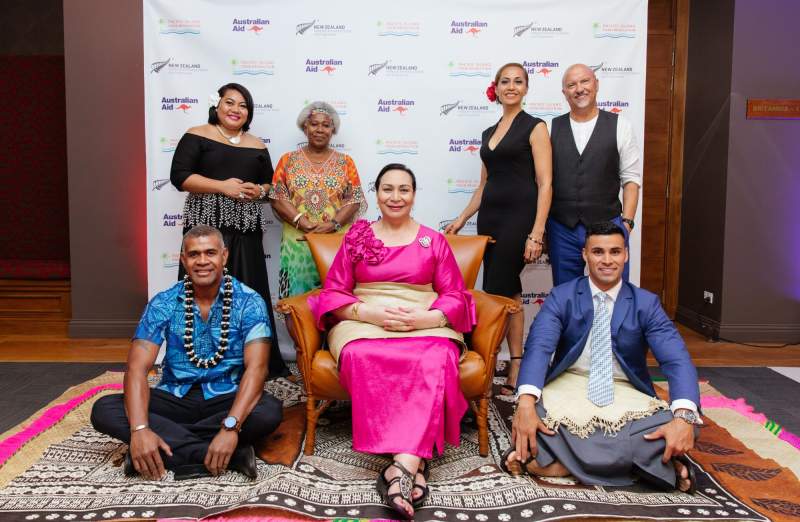 The Princess Royal Salote Mafile'o Pilolevu Tuita of the Kingdom of Tonga is a member of the House of Tupou. She is beloved in the Kingdom. HRH is an advocate for organics in Tonga and has appeared with Robert Oliver speaking on this in REAL PASIFIK TONGA. The Princess Royal Pilolevu has terrific charisma, dignity and because Tonga is the only Pacific nation with a continuous royal line, brings a distinctly Tongan flavour to these episodes. She also wrote the foreword to Robert’s award-winning first book “Me’a Kai – Food and Flavours of the Pacific”

Dora Rossi is Samoa’s most glamorous chef and one of its most beloved. A trailblazer in Samoa, Dora’s two Apia restaurants are supplied by local organic farmers under the Farm to Table initiative created by Women in Business Development Samoa and Robert Oliver. In 2016 and 2018, Dora’s family won Best Restaurant in Samoa for their “Paddles” Restaurant at the Samoa Tourism Excellence Awards. A TV pro, Dora appears in Pacific television series REAL PASIFIK and is featured in Robert’s award-winning Samoan cookbook “Mea’ai Samoa: Recipes and Stories from the Heart of Polynesia”

Bertrand is a proud Pacific Islander, who honours the ingredients from the islands by using them in his dishes and cakes. He believes that Pacific food and people have a story and he tells it by creating his childhood favourites- fudges, cakes, pies and beverages. He owns and operates Sweet and Me, a cake shop in Auckland, New Zealand. He describes his business as “For Pacific Lovers who need artistic non-traditional Island cakes, Sweet & Me is a Speciality Cakery that is true to the Pacific spirit.

Votausi Reur-McKenzie is known as “The Queen of Ni- Van Cuisine”. She studied as a nutritionist at Queensland University and had her “aha” moment when she realised that her own cultural cuisine ticked all the nutritional boxes she was learning about. She returned to Vanuatu and formed “Lapita Catering”, which produces food products from local crops, supplied by a network of over 1,000 farmers that she has cultivated over the years. A true Pacific trailblazer, Votausi sparkles on film: she truly lives what she preaches. Votausi hosted “Real Pasifik Vanuatu” with Robert Oliver.

Fololeni Curr was born and raised in Tonga, graduated from the University of the South Pacific, joined Tonga’s Ministry of Finance then migrated to New Zealand. While in New Zealand she worked in areas of Pacific health and later with mental health. She’s also lived in Fiji, Turkey and Egypt. She has learned from the different cultures - their food, their knowledge and their ideas. Living away from home and in different cultures and countries, made her realise how fortunate the people are in Tonga and in the Pacific, especially with the wealth of healthy food. Her own culture is the foundation that helps define and guide her.

Pita grew up in Tonga and gained widespread fame as an Olympian and flag bearer representing Tonga at both the 2016 Olympics and 2018 Olympics. Pita is a co-host for the 1000-days episode that focusses on the health of babies for their first 1000 days. Pita has demonstrated his commitment to youth in Tonga and the Pacific region through school events and working in other youth development programmes in the Pacific. Pita is a motivational speaker and actor, as well as working for several years as a youth counsellor in Australia. He is also hoping to qualify for a new sport at the 2020 Olympics in Tokyo. Pita has a degree in engineering.