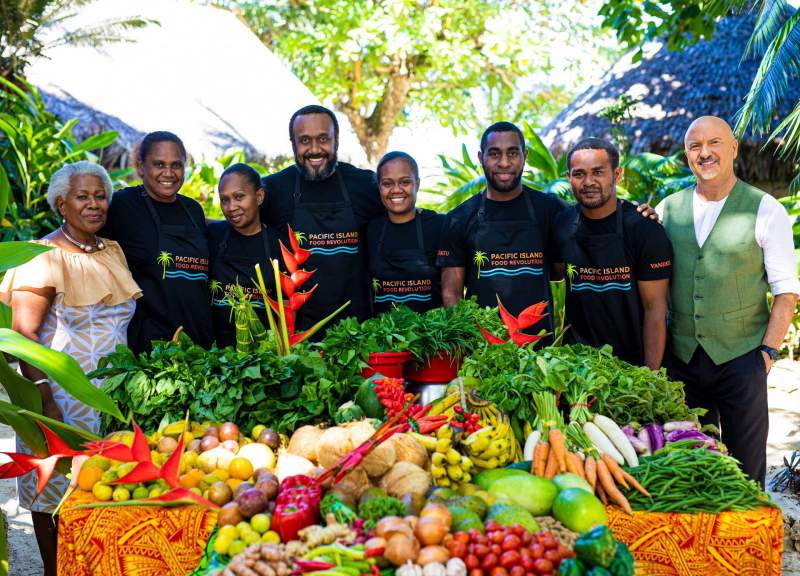 Before COVID- 19, the Pacific was already in crisis. Diabetes, heart disease, and obesity are ravaging the region, all due to what people eat. The numbers are shocking: three Fijians a day undergo diabetes-related amputation, 90 per cent of Tongans are obese, and 40 per cent of the Pacific’s population has been diagnosed with a non- communicable disease (NCD). In fact, NCDs account for 75 per cent of all deaths in the Pacific.

COVID-19 has only exacerbated this, with vulnerability to serious impacts from the virus being especially high for people with existing underlying conditions. Immunity has never been more important.

How did this happen?

There has been a fundamental change in the way Pacific people eat. Over the course of a generation, processed food has displaced the traditional diet with dreadful effect. Globalization and the long history of colonization in the Pacific, along with the tsunami of processed foods have uprooted the region’s traditional diets.

But the key to good health is in the Pacific backyard, the farms and markets and in the rustic dishes Pacific grandmothers cook. The answer lies in local cuisine.

Funded by the governments of Australia and New Zealand, Pacific Island Food Revolution is a multi-media campaign designed to re-activate local cuisine and return the region to its original good health. PIFR’s TV series have been screened in over 25 TV networks across 12 Pacific Island countries as well as internationally in Australia, New Zealand, south-east Asia, and the United Kingdom. The program has produced radio shows in Fiji, Samoa, Tonga, and Vanuatu – all in local languages and reaching audiences in rural and maritime areas. Social media reach for the program is outstanding, reaching almost six million people.

At the end of year 2, the program commissioned the Busara Centre for Behavioural Economics in close collaboration with local partner organisations that surveyed 330 people to assess its impact in Fiji, Tonga, Vanuatu, and Samoa. Additional in-depth qualitative interviews with 40 people were conducted to answer outstanding questions that arose in the quantitative analysis.

The results are revolutionary:

What does this mean?

If just 10 per cent of the 42 per cent maintain these food choices over five years, an estimated 165,000 people will have moved towards better health outcomes.

will have moved towards better health outcomes

Net savings of over

across the four participating countries

This will result is net savings of over US$46 million in the four participating countries. This is a savings in health costs alone. Let alone the anguish of losing a loved one, the traumatic effect on society, the loss of productivity and other social impacts that the crisis has created. Imagine this impact amplified across the entire Pacific region.

Pacific Island Food Revolution is not just a television show. We are a social movement that’s empowering and inspiring the peoples of the Pacific to make good food choices. Our innovative model works – and the numbers from this report proves this. If we continue this model for the next five to 10 years, we believe we can flatten the curve of NCDs in the Pacific

PIFR works closely with Pacific governments and understands the need for close collaboration on a national level to address the region’s health woes. The project enjoys significant support from Pacific communities to the highest levels of Pacific leadership, with thrilling guest appearances from such notables as the Prime Minister of Samoa Fiame Naomi Mata’afa, and Her Royal Highness Princess Salote Pilolevu Tuita, the Princess Royal of Tonga.

This report has incredibly promising data and supports the vision of the Fijian Government in ensuring a healthy Fijian population. Good food does not only address NCD issues but CDs or communicable diseases like COVID-19, too. Many Fijians with diabetes and other NCDs are at a higher risk of being severely ill if they contract COVID-19. We need partners like Pacific Island Food Revolution to continue to push the message that local healthy food is a far better option than the unhealthy processed ones

PIFR’s Impact Assessment Report shows us what we’ve known all along, that the answer to our regional health crisis is quite literally in our own backyard – our local food. This social movement that is led by Pacific Island Food Revolution is going to change the landscape of Tongans’ health if the program continues and will move us towards a prosperous nation