A Recipe of Hope

Life is like a deck of cards. For some, they’re dealt a good hand and others not so good. Leonid Vusilai categorised himself in the latter.

Growing up in a squatter settlement in Vanuatu’s capital Port Vila, Leonid’s parents tirelessly worked odd jobs to give their son and his siblings a decent education. His parents’ sacrifices fueled Leonid’s resolve to make a better life for himself and his family.

Leonid knew that creating local food was his dream and with his father’s support, he worked long hours in different restaurants in Port Vila to upskill himself. But it wasn’t easy.

“Some of the places I worked in did not provide knives and other utensils I needed to cook so I would save my salary to buy them. I wasn’t paid a lot of money so in order to buy my knives I was not able to afford food. Sometimes I only drank water to survive,” he said.

“I had to walk from home to work and then walk back when I’m done. It took me two hours for me to walk home so I when I finish at midnight, I’d be at home at 1:30 am.”

Once while returning home, Leonid was robbed and assaulted but that did not deter him.

“I kept going because I loved cooking. I wasn’t paid very well but I continued on because I wanted to upskill myself and gain experience,” he said.

When the opportunity to be a contestant on the inaugural Pacific Island Food Revolution presented itself, Leonid jumped at the chance and teamed up with Knox Taleo.

The reality show and communications campaign promote eating local food while helping to revolutionise Pacific diets by shifting away from imported, highly processed foods and returning to their traditional nutrient-dense local superfoods.

Leonid and Knox represented Vanuatu in the show’s finals and ultimately won as the first Pacific Island Food Revolution champions.

“When they called my name and Knox as winners, I broke down crying. I thought of my father who always supported my cooking. I’m sure he was looking down on me beaming with pride for being the first ever winner of the Pacific Island Food Revolution and championing Vanuatu food internationally,” he said. Leonid’s father passed away in 2017. He was 58.

Pacific Island Food Revolution propelled Leonid forward to bigger and better things. Through Vanuatu Skills Partnership’s Farm To Table program, Leonid now works with rural bungalows and restaurants in developing their menus to include local food from local farmers, thus financially benefiting the local community. Leonid has assisted almost 20 bungalows, restaurants and other food businesses in Vanuatu and plans on working with more this year.

Leonid also assisted in the setup of the Sanma Agri Food Trade Association (SAFTA) which is made up of almost 100 farmers as well as bungalow and restaurant owners who work and live in the province of Sanma. SAFTA was created so that farmers and chefs better understand each other’s challenges and worked to ensure that their demands were consistently met. In doing so, bungalow owners refrained from importing farm produce favoring locally grown produce instead. This has greatly benefited the local farmers and the economy.

“If it weren’t for the Pacific Island Food Revolution, I would not have been able to develop local food culture and bring chefs and farmers together to promote Ni Vanuatu food. The local Vanuatu food culture has been neglected but not anymore. Our farmers are now financially benefiting from the promotion of local food and I thank the Pacific Island Food Revolution for that,” he said.

The 27-year-old now lives with his partner and their two children in their lovely home far from the squatter settlement that he grew up in.

“Pacific Island Food Revolution has opened up many doors for me and I can now financially look after my family. The show saved me and I will never be able to repay them for what they’ve done,” he said. 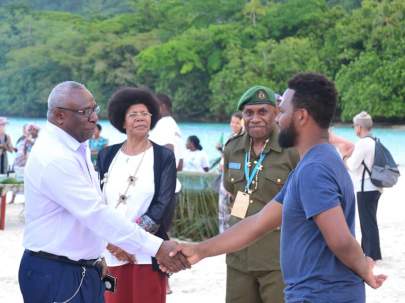